The team did brilliantly, winning 4 out of the 6 matches.

It was played in a super spirit, with Alfee K receiving the Compassion and Responsibility Award for stepping in to play for Abbott Aplhege, who were a player short.

Congratulations to the ten boys who took part. 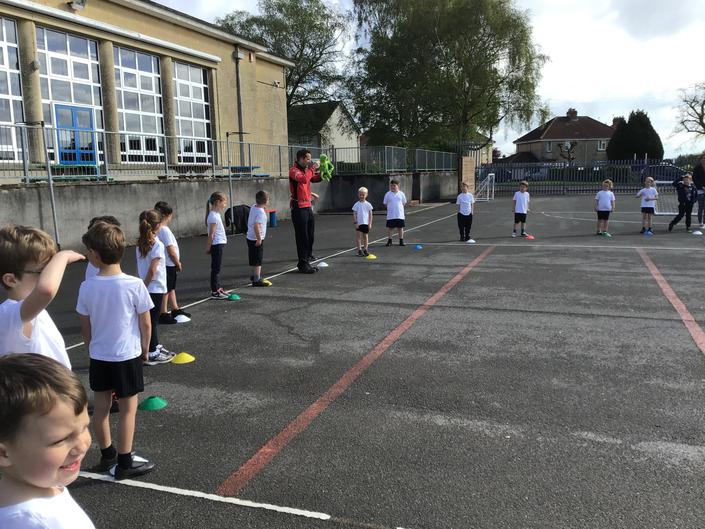 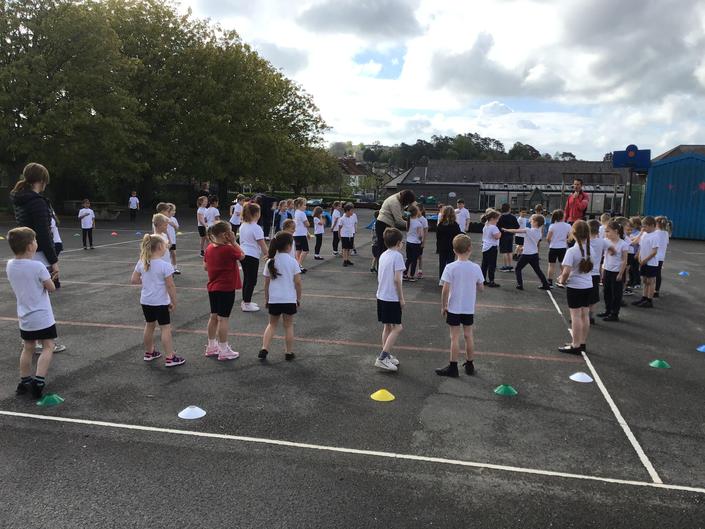 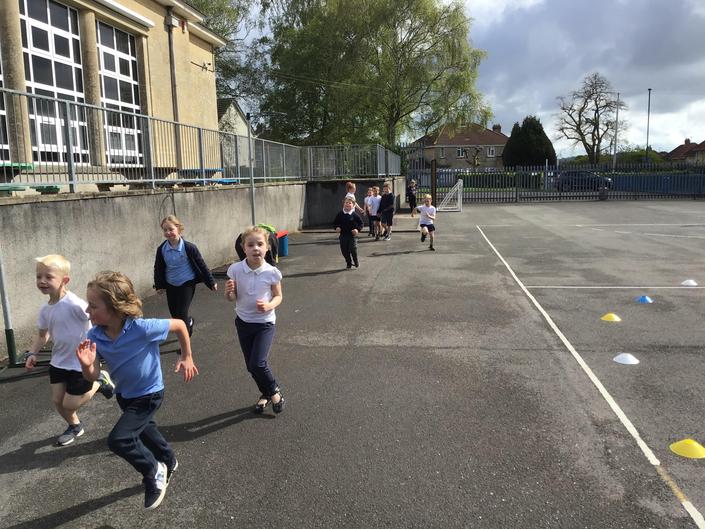 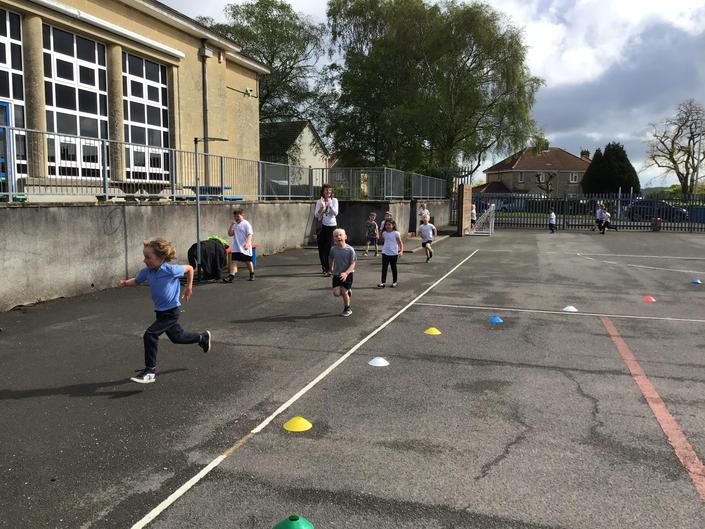 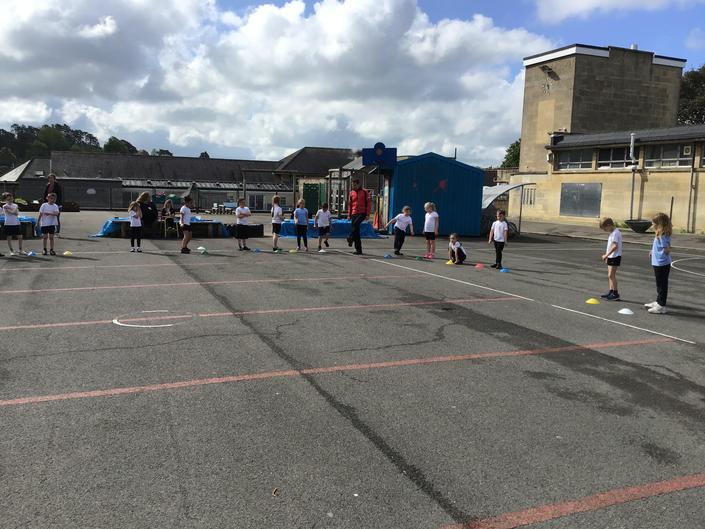 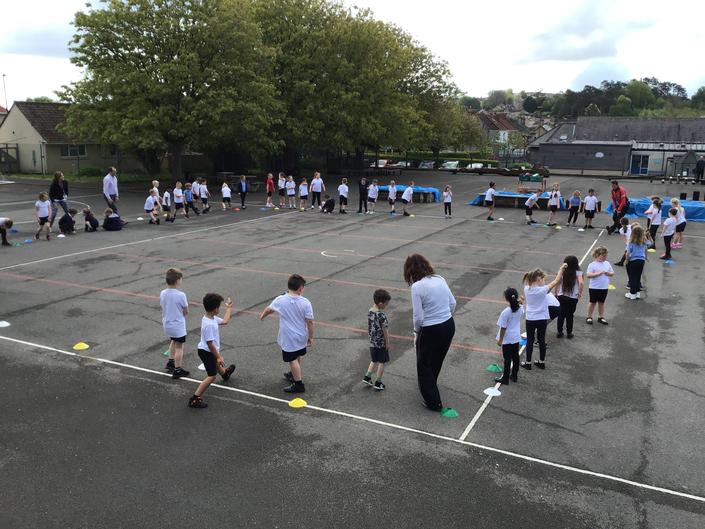 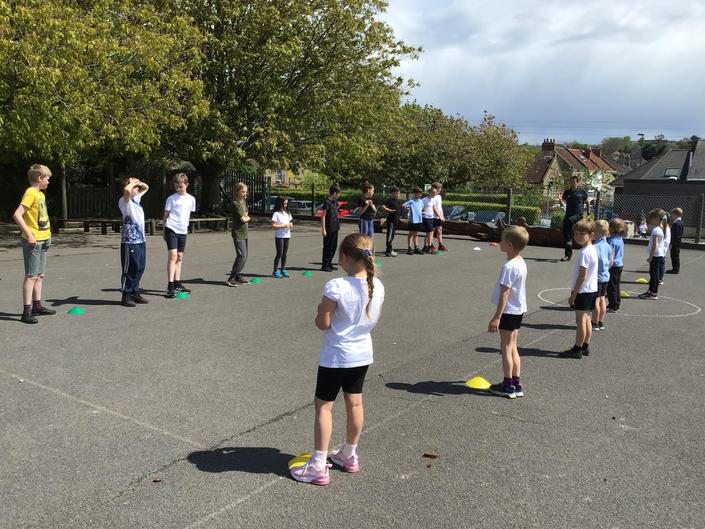 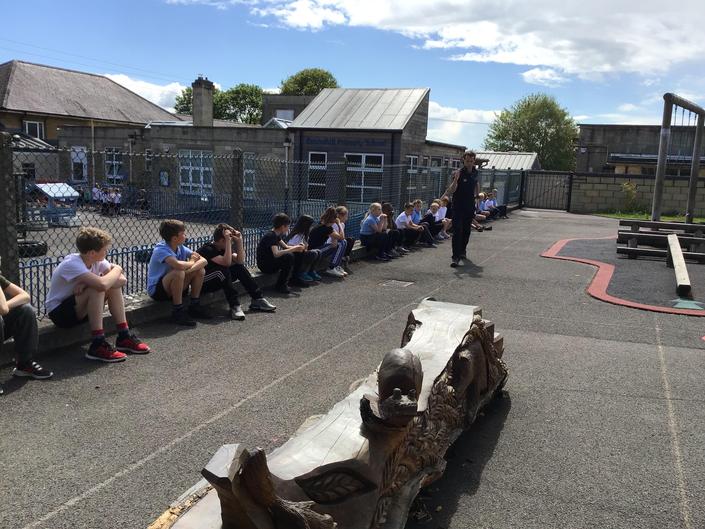 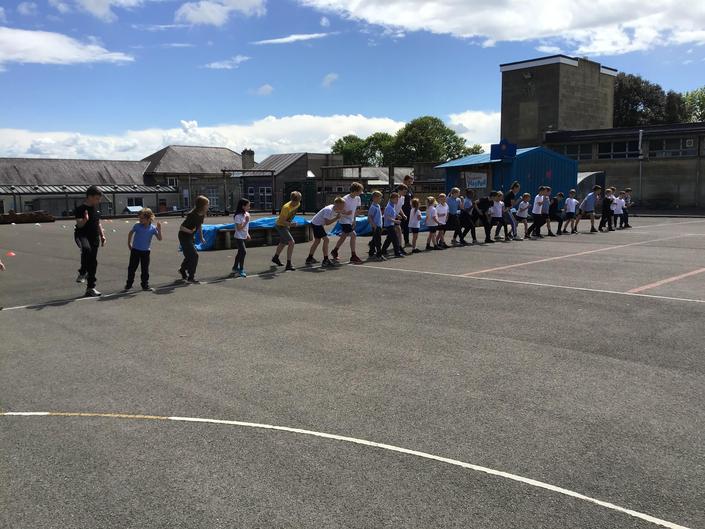 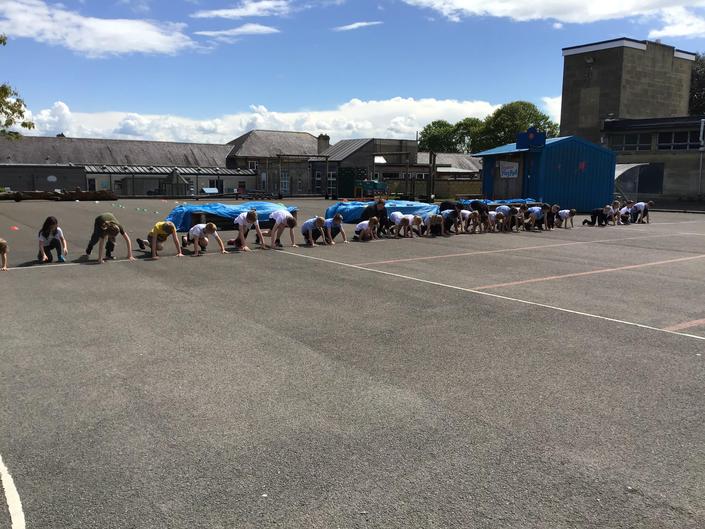 The Big Pedal Day- over 70% of the children at our school walked, cycled or scooted to school.

We welcomed Oldfield Park Juniors to our school this week for our semi-final match. It was a cracking game that went end to end. Sadly we lost but we enjoyed getting so far in the tournament. Well done girls!

The Bath Rugby Foundation have been working with our Year 6 children as part of their 'Tackling Health' initiative. Half class based and half practical, the children are taught how to stay physically active and maintain healthy bodies. The children have loved working with the foundation this term! 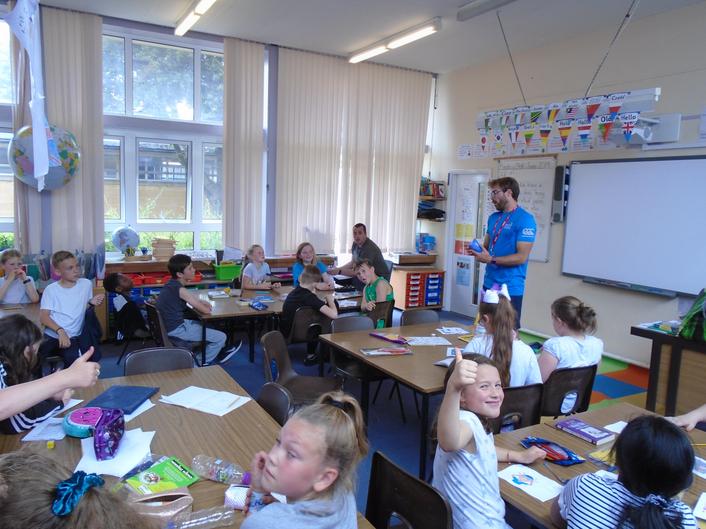 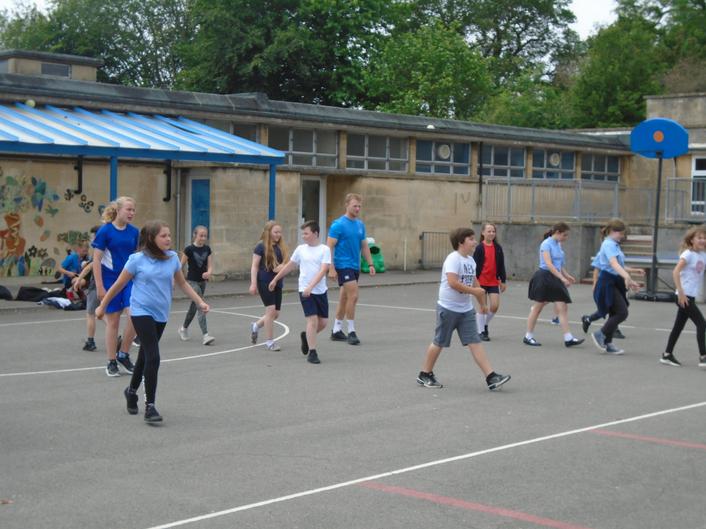 Thank you to James from Southwest DodgeBall for a fun afternoon delivering dodgeball sessions to some of our KS2 classes... the children loved it!

All of our children performed superbly, winning a number of their events.

Well done girls and boys for representing us so well!

Party in the City

On Wednesday, Year 5 performed their Bath Festival routine at Twerton Park, home of Bath City FC. As well as numerous people involved with Bath Festivals, we were joined by St Michae'ls School and Action for Hearing Loss. We demonstrated the passion and agony involved in a football match and in being a football fan.

Roundhill attended the annual BANES Tag Rugby Tournament this week. We were one of 12 teams in attendance and spent the whole afternoon playing Rugby and developing our skills.

We got to play 7 games in total and were all thoroughly exhausted by the end of it!

Well done to the girls and boys who represented Roundhill so well.

We were delighted to welcome Matt Fiddes Taekwondo into Roundhill today. They worked with children across KS2; delivering high intensity fitness work mixed with Taekwondo self-defence skills and promoting a respectful ethos.

Our very own Jessika L helped the instructors as she is a member of Matt Fiddes outside of school and provided expert guidance to the children.

On Monday 4th February, we welcomed WASPs' Girls Football Team to Roundhill. The girls on both teams were really excited and happy to represent their schools in the BANES Cup. Both teams played really well and fought hard to win. It was a closely contested match with great goals scored by both teams. In the end Roundhill emerged the victors, winning 4 - 2. Well done to Milly, Charlie-May, Amber-May, Lexie, Ciera, Keira-Rose, Sophie, Poppy, Kallie and Ines.

James from Scoot Fit has been working with us this week. He has taught us how to use Scooters safely, so that we can ride them to school in the mornings. As well as learning how to balance on a scooter properly, he plays lots of fun music and puts out obstacles and rumps for us to manoeuvre through. What a great experience for the whole school!

Roundhill was very excited to welcome Jim Gump into school on Monday 28th January. He is an inspiring man who motivated our whole school into becoming more active during his visit. He told us about the year he completed a Triathlon every single day! How he runs a minimum of 13 miles every day! And how he plans to run the distance of the equator with his dog Flow!

It will be a visit the children will remember for years to come and has encouraged many of them to run more themselves.

The girls involved in this years Dance Umbrella have been working very hard with our dance coach Lucy. The name of their dance is 'A Murder Mystery' with the choreography using street dance and physical theatre to solve a crime!

It is looking great and promises to be an upbeat and memorable performance at the Forum. We are looking forward to it!

On Monday, Caity and I went to BANES' Sports Leadership event.

When we arrived at Bath University, we both saw multiple other schools: Newbridge, Oldfield, Clutton Primary etc.

Later, (when everyone had arrived) a professional synchronised swimmer was explaining what her job entailed, then showed us a clip of one of her routines. It was very interesting to hear an actual athlete talk about their job in detail and up-close.

After that, we did a lot of practical activities, such as: making up our own games; cup stacking and a netball / basketball-like game.

We had a great day at Bath University, meeting new people, making friends, having fun and learning to be good sports leaders. We enjoyed ourselves and would love to go again!

Yesterday Roundhill attended the Sportshall Athletics at Wellsway School. The atmosphere was electric and each child felt a mix of excitement and nerves before their races. We took part in lots of different track and field events and came away fully exhausted from an evenings racing. Well done Roundhill!

Writhlington and Baskervilles must be very proud!

Football Cup match vs Combe Down

On Monday, Roundhill played Combe Down in a cup match. It was an exciting game with lots of end-to-end football. Corey scored a great goal and Harley saves lots of shots from the opposition. Sadly we lost the game but everyone played really well and had a wonderful time. 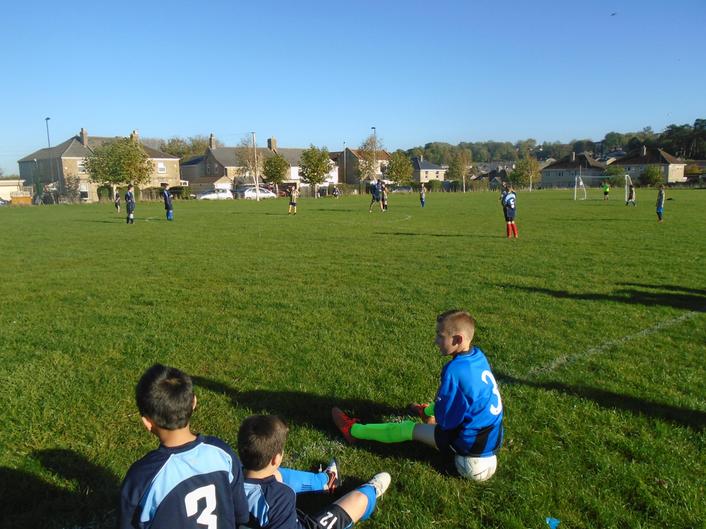 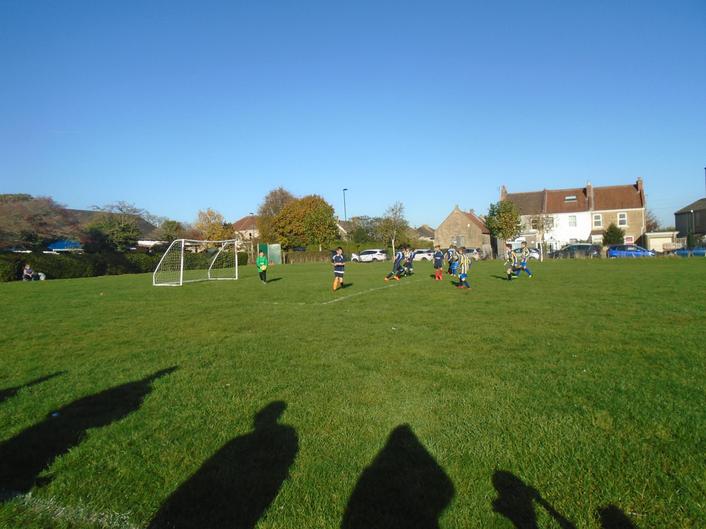 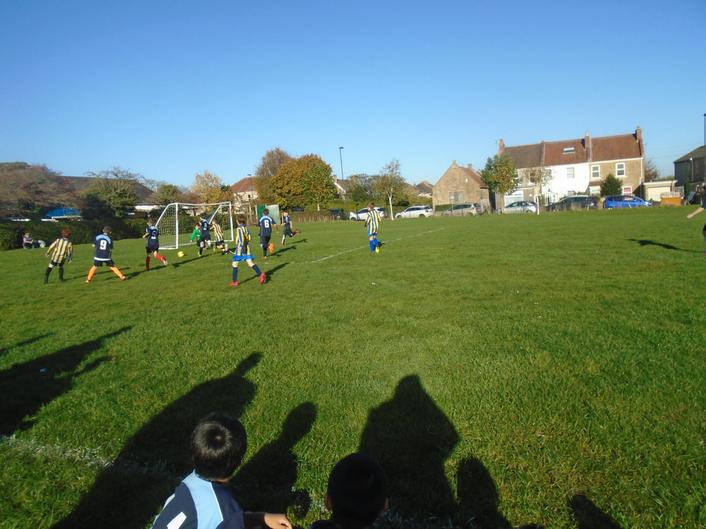 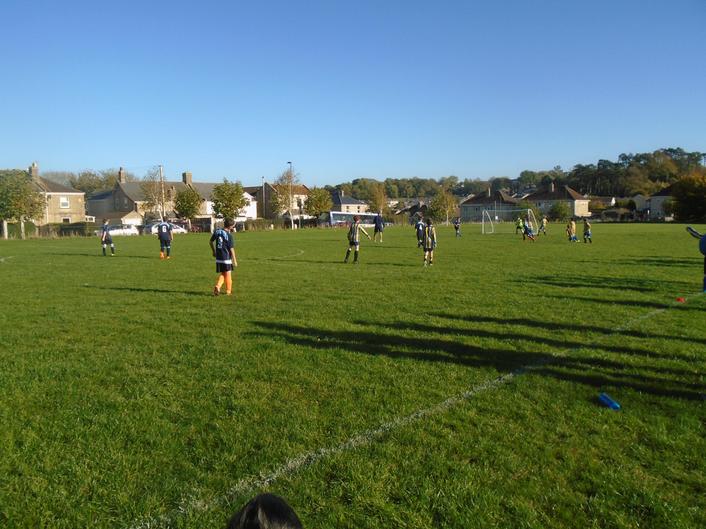 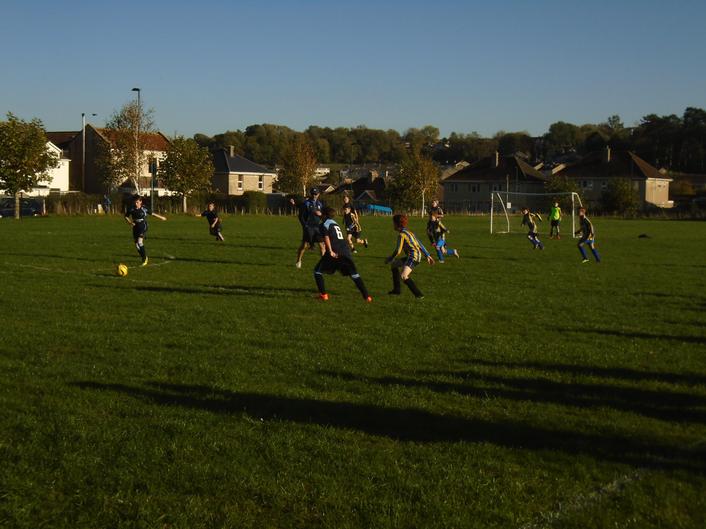 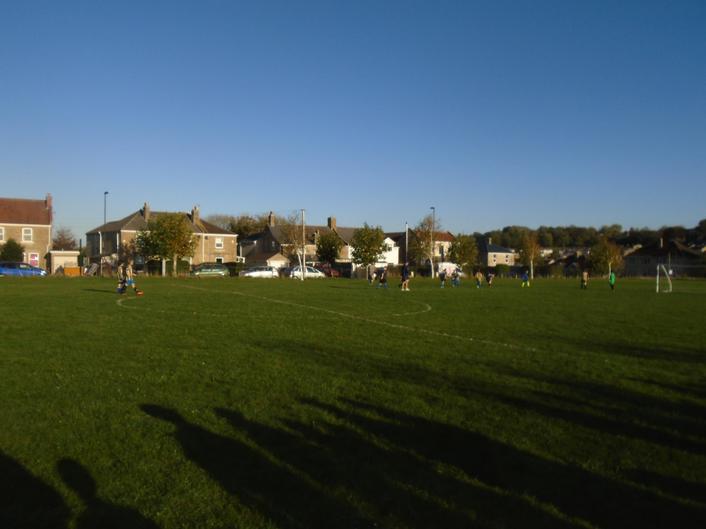 On Monday 22nd October, seven girls from Year 6 took part in a Netball Tournament. They were joined by 5 other schools and everyone involved had a great time. The standard of Netball from the Roundhill girls improved greatly as the tournament progressed, resulting in a closely fought final game. Well done to Amber-May, Esme, Tamzin, Jessika, Erika, Caity and Olivia for representing Roundhill so well!

Today we were lucky enough to have a Badminton Coach visit Roundhill. He taught us lots of Badminton skills and we all had a really great time! We can't wait to play Badminton again in our PE lessons.

First up was the boys Year 5 race. Ryan got off to a good start and ran in 4th place for a good time but unfortunately couldn't keep it up. Kalib contended to stick around the 40th place.

Then it was the girl's Year 5 race. Sadly, not all could continue for the whole race but still did good.

Then we had the Year 6 girls race.  Erika started off great, so did everyone else. Erika pushed her way through to 10th place. It was a long way - 1.2 km.

The end scores were very good.

Ryan, Kalib, Ellie-May, Kallie and Eme all did really well too!

Roundhill joined  'The Body Coach' in his fitness week this week. We joined thousands of other schools across the country in a 30 minute HIIT session.

All the children loved taking part and enjoyed the morning cardio session.

If you want to try it at home, visit his Youtube page: Body Coach TV. 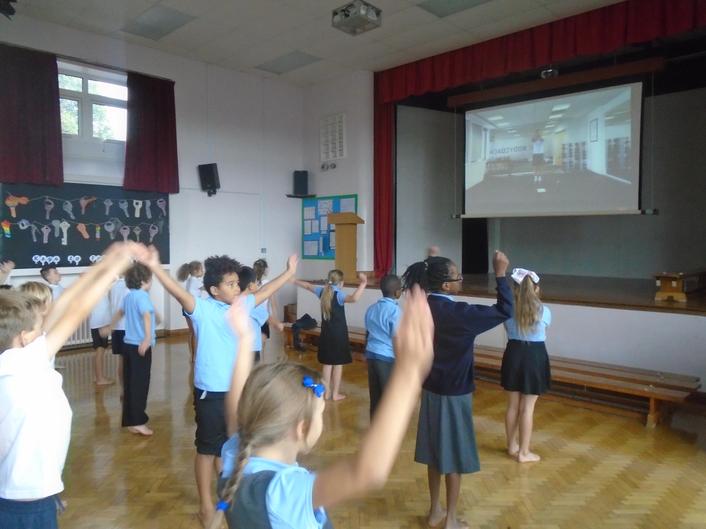 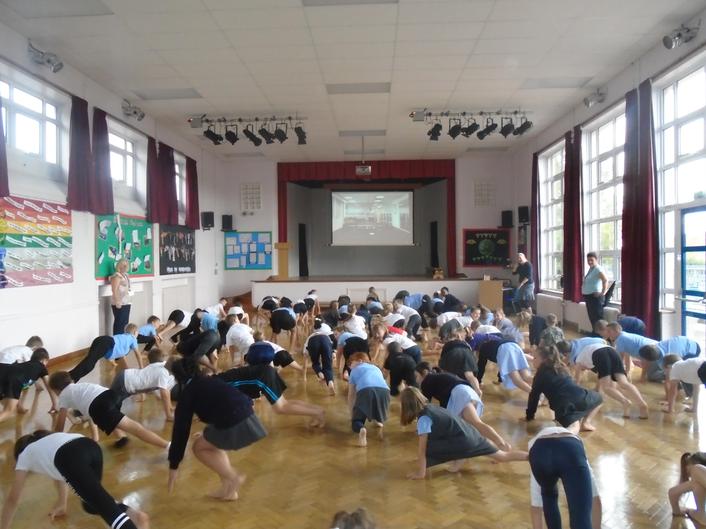 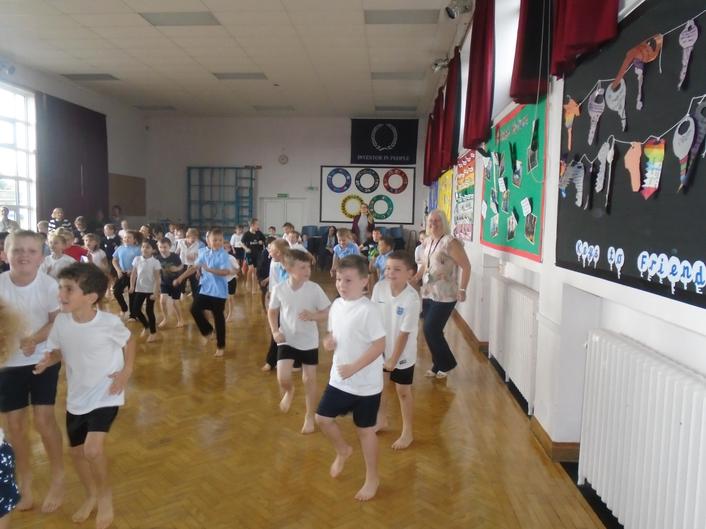 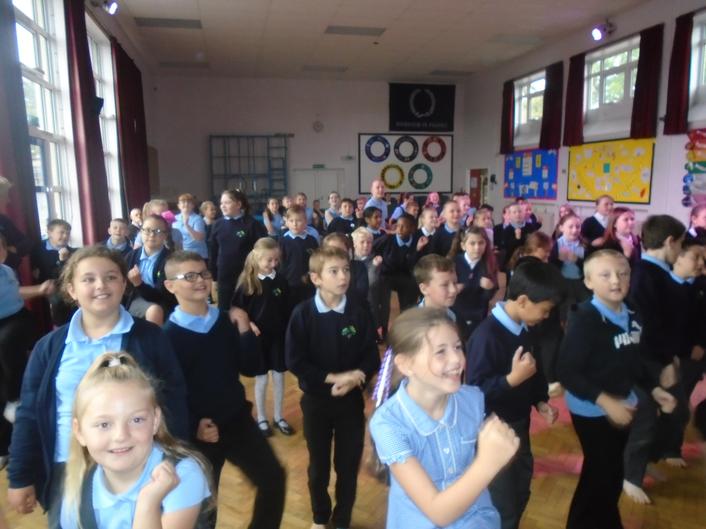 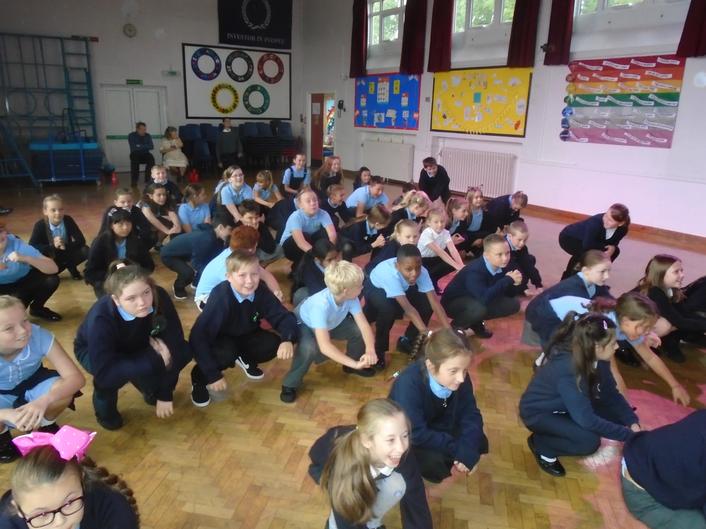 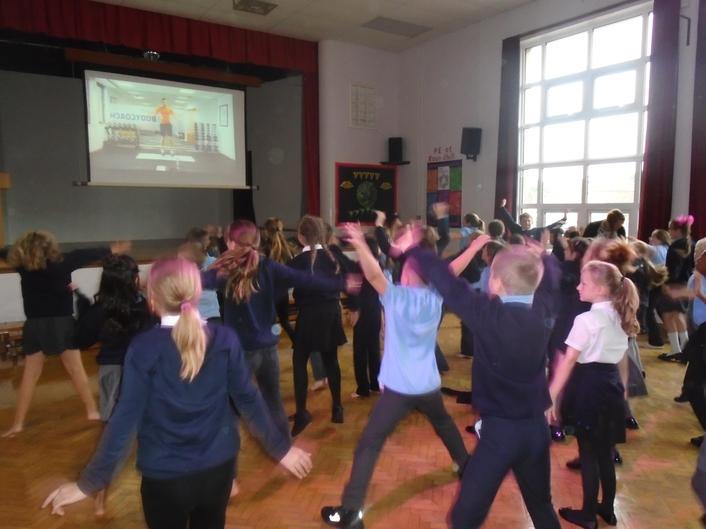 On the 9th July 2018 we went to BCA to represent Roundhill in the Swimming Gala.

We were racing against:

We had a great team who were:

The first race was boys front crawl and Jenson performed a phenomenal win, getting us off to a good start. Then we had boy's breast stroke and Beau won first place, with a new creation of breast stroke (mixture of front crawl, butterfly and breast stroke).

Then Isabelle M took 2nd place in front crawl, a near win. It was a fab game and everyone played well. Sadly St Phillips won but everyone played very well and we all enjoyed it very much!

By Ivy and Isabelle M

We were lucky enough to have Fernando join us today and teach us all about Basketball. We developed our ball skills and learnt to dribble without losing control of the ball. Our shooting got much better and all children in Years 3, 4 and 5 enjoyed the match at the end.

A huge thank you to Southdown Fish Bar for sponsoring our new football kit! We really appreciate it and can't wait to wear it for our next match.
Our new sports kit, as modelled above by the School Netball team.

We have several sporting events happening in Term 4:

We are hoping to organise a Netball game very soon, so watch this space 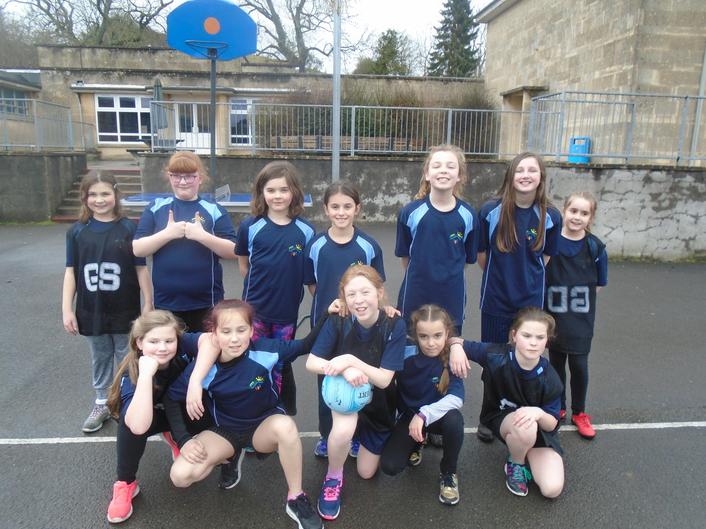 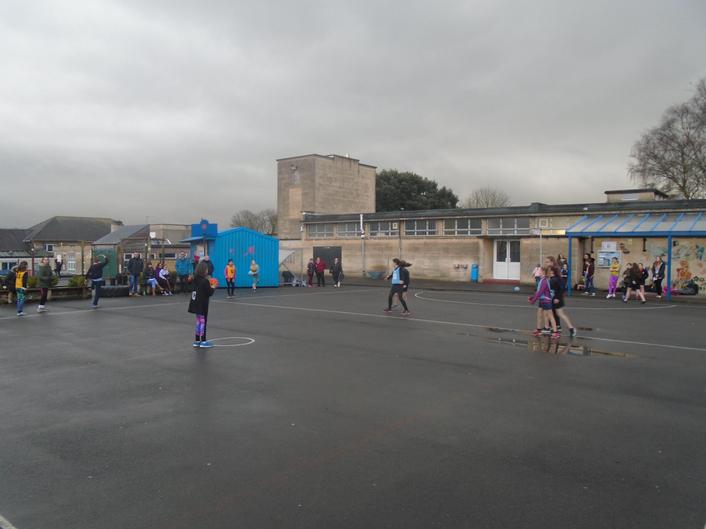 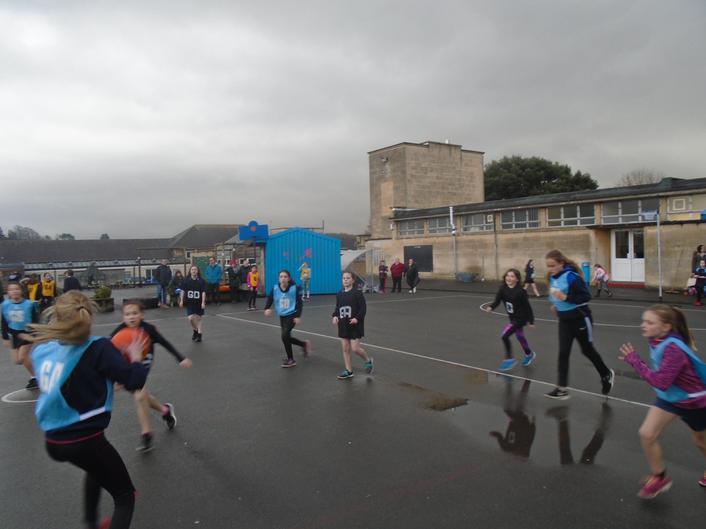 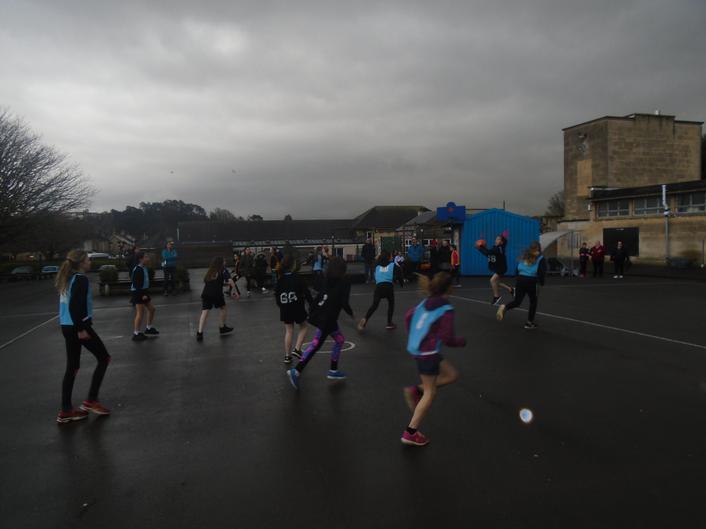 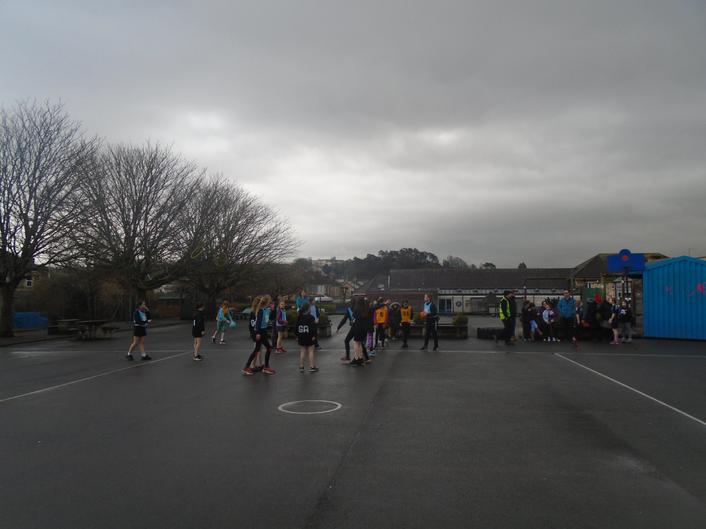 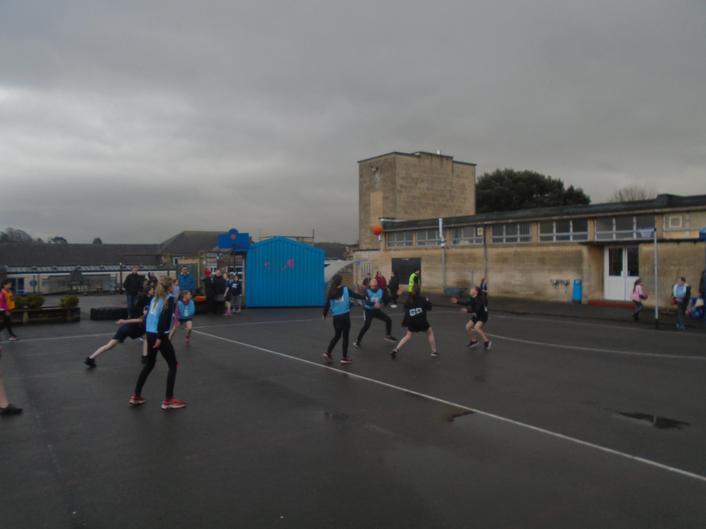 Yesterday, our Netball team played against Oldfield Park. In the first round, Lici, Poppy, Ivy, Emily P, Ruby and Milly Played. The blues scored 5 so they won the first round. In  the second round they shot to the left and we shot to the right. In the last few seconds Poppy scored so we won that round. In the third round and fourth round, Esme, Lily, Emily J, Jessika, Eleanor and Rosie played and we won the third round. The fourth round we got off to a good start and scored one point, but then they scored 2 points so we lost that round. In the final game we managed to make them not score but we didn't score ourselves. Even though we didn't win it was a fantastic game and everyone played their best.

By Esme and Ivy

During the first quarter we pushed up well, but Moorlands made a comeback but neither scored. In the second quarter Moorlands subbed their entire team. They then pushed up to the corner flag and scored from there! Somehow they scored another cracking goal!

During the third quarter, due to the wind and a slope, Moorlands scored again - 3 times! In the final quarter I scored.